I have over twenty years of experience in design and illustration.

I received my Graphics and Visual Design Diploma from Kwantlen College in 1989 and focused on learning printing immediately after. I worked for Transcontinental Printing in the 90’s and started an apprenticeship in pre-press. I moved to Kelowna and worked for Ehmann Printing and finished 3 years of 5-year apprenticeship in 4 color pre-press. During that time, I started my first newspaper in the Okanagan, Boomtown Arts and Entertainment. After three years of apprenticing in pre-press, the industry changed to computers from plates, chemicals, and film and my apprenticeship paid for computer upgrading so I moved back to Vancouver 1993, sold Boomtown and went to Burnaby College for desktop publishing.

My first design job was on Vancouver Island for Kask Graphics in Campbell River in 1994. I moved back to Vancouver to work at Laser’s Edge Service Bureau for several “cutting edge” years until a layoff. I was hired to run the graphics department at a busy print shop called Zippy Print until I was offered a position at Matrix Video Systems as an assistant to the Avid Video system service technician and learned Adobe After Effects. Times changed that technology as well, so I  moved to Tel Av Audio Video as a service technician, setting up sound and video for events and was eventually laid off.

I went back to school at BCIT in Computer Animation and New Media (1998) where I learned Maya, Soft Image XSI, 3D modeling, 3D animation, writing for New Media, and 2D Animation.

During school in 1998, I was hired at a startup animation company called Credo Interactive that made proprietary software, called Lifeforms and DanceForms. The company was born out of  SFU, and I was hired as an artist, animator, software tester, and plug-in tester.  I worked with a large team of programmers, a smaller group of artists including myself, and our project manager, directors, and a few others.

The Director of Credo, Sang Mah, showed me how to Gantt chart large projects and to brainstorm.  I was flown to different cities to demo Lifeforms for Credo at MacWorld and Siggraph in 1999. As a company, we built several virtual worlds using the Active Worlds engine and Credo’s proprietary software. After creating several worlds (like an underwater disco with a mermaid, dance moves, transports, and a dating game) for international clients, the “DOTCOM” crash happened in 2000.  I left to make a backup copy of myself aka “child.”

Getting back to work, in early 2000, I taught Photoshop for Animators at BCIT, teaching the students how to create and apply texture maps to their 3D models in Maya and I worked for Wai at Graphic Zoo and learned finishing among other things.

In 2006, I went to VanArts for Game Design and Animation. My drawing instructor was from Walt Disney and I learned so much from him.  I joined a small game company (Second Sun Studios) for a contract from EA, and I modeled cars for Need for Speed Underground 2.

In 2007, I started working for Business in Vancouver, Glacier Media Group as an ad designer and publication designer.  In 2008, I started my second newspaper called The Skinny Magazine (2007-2010), based in Vancouver about the local music scene: reviews, news, and interviews. It became very popular but after 3 years, and the decline of newspapers’, I gave it to BeatRoute Magazine, where it still lives as a section in the paper.

In 2013, I was laid off from Business in Vancouver but continued to freelance with them until 2014.

Since 2013, I have been freelancing for BC Epilepsy Society, miscellanyfinds, Arts Umbrella, Grandview Woodland Food Connection, and other clients.

I am a life-long learner and a professional. I have been to Van Arts, Emily Carr University of Art and Design, Vancouver Film School, and BCIT.  Lately, I have been taking classes through Video In and Video Out, Ladies Learning Code.

My portfolio site is a WIP! Hope you enjoy.

Please email me for my resume or any inquiries: dollymommadesign(at)gmail.com

BELOW Lou Ferrigno and me at the Vancouver Fan Expo. 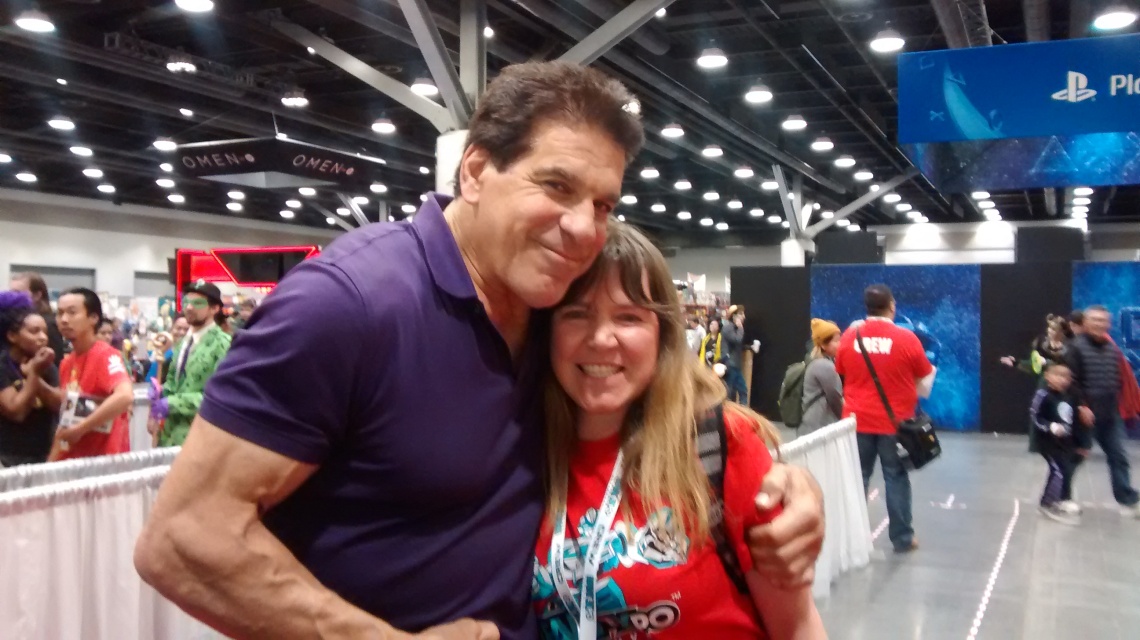